Forgive the mess. When I transferred my site to a new server, the reupload messed with my page layouts.  I am slowly fixing them as I have time. 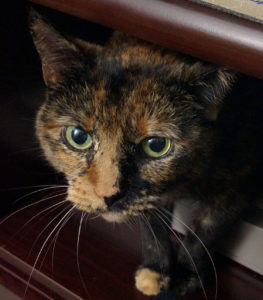 (Note about her name: I understand that I have used a word that some people consider offensive as my cat’s name. I did this not out of maliciousness or callousness, but out of love. As both a writer and an LGBTA individual, I believe words are offensive only if they’re used in an intentionally insulting and hurtful manner. The word “faggot” to me sounded silly, easy to say, and sounded cute in a “talking to a cat” voice. I would never use the term toward any LGBTA individual unless they were a friend and it was in a playful manner.)

Faggot was not always the most pleasant cat. She had no shortage of hiss and growl if she didn’t want to be bothered. Despite that, she always loved to be in the same room as me, usually in a box or on the back of my chair while I worked. She’d climb into my lap to be pet, and reach to be picked up and carried to the kitchen when it was time for food. Her special food alarm got her excited every time. For a cat that loved eating and ended up nearly 16lbs at her biggest, it’s almost ironic that she died because she wouldn’t eat.

I had never had a cat growing up. My parents disliked cats, and always had dogs instead. My first experience with living with a cat only came when my high school best friend and I got an apartment together after high school, and she had two tabby kittens, Fumi and Nekki. Living with those two completely changed my opinion about cats, and I realized that a cat would be the perfect pet for me.

When I entered the Brookhaven Animal Shelter in New York on June 4, 2004 with the intention of getting a kitten, I had hopes of getting a tabby, because I’d been semi-attached to the two that I had once shared a home with. The shelter did not have a very large kitten selection. They did happen to have two beautiful tabby brothers, an orange and a silver. Unfortunately, since the two were bonded with each other, the shelter would only adopt them as a pair. Since at the time I could only afford one cat, I had to pass. I don’t remember what other kittens were there, but I remember being a bit disappointed, and pondering with Chaosie about whether we should come back another day. I wandered back and forth from kennel to kennel, trying to decide what I wanted to do.

A couple came in during this time, returning a kitten they’d gotten only a couple days before. They claimed that they hadn’t known that the husband was allergic to cats and couldn’t keep her. The shelter put her in a holding kennel, which was in the room next to  the other cats. I heard meowing, and went over to look.

She was a funny looking little thing, mottled orange and black, crying and trying to climb the kennel door. She was estimated to be about seven weeks old, and I felt so bad for her that she’d found what she thought was her forever home, only to be returned like an ugly christmas sweater only days later. I said to Chaosie, “We’re getting this one.” And so we did.

The people who had owned her for two days had named her Pebbles. I renamed her, of course, naming her Chirako after a cat character I had designed a year previously. Obviously that name didn’t really stick. Most of the time we just called her Cat. Chaosie’s mother thought that her coloration was hideous, and called her Ugliness, but I personally thought she was cute and unique.

We found out rather quickly that like most torties, she was quite the tsundere. She was extremely affectionate when she wanted to be, but too much stimulation or the wrong kind of stimulation caused hisses and growls to erupt. She also randomly and with no specific reason would pee on things. Any clothes or plastic bags left on the floor was a risk of being peed on. We could not let her sleep in our room at night, because we didn’t trust that she wouldn’t pee on the bed. She would sit outside the room and meow, and eventually learned that she could jump up on to a cabinet to get onto the freezer, and then jump up over the wall and down onto the bed (we lived in a partially finished basement).

In November, I finally got a digital camera, so the first pictures of her are when she was six months old.

In June of 2005, we went to Canada to visit my parents,  and I insisted on bringing the cat. It was a good thing, too, because for reasons I will not get into here, I was stuck in Canada for three years with mostly only Faggot for company.

My parents, who did not particularly like cats, seemed ok with Faggot while I was there for two months. But they started letting her outside on her own despite my protests that she was an indoor cat. Faggot loved being outside, however, and she always came back in the evening, often bringing home small animals as offerings for me.  Birds, mice, once even a baby rabbit. We attached a larger bell to her to give the little critters a chance, but she quickly learned how to move silently with even that, and continued to bring me gifts.

A few days before I was to move in with a high-school acquaintance in the city, Faggot came back into the house limping. Somehow she’d manage to skin the inside of her right foot. Nobody had any idea what had happened. Fortunately it was nothing serious, and healed up just fine.

My new roommate (who I had known since 7th grade but was never more than casual friends with) had two cats of her own, long haired tuxedo brothers who had only known each other and were terrified of Faggot. In turn, Faggot didn’t really like them much either, and chased them. My roommate, being kind of dense about cats despite having two, and overprotective of her “babies”, demanded that Faggot be kept in my room instead of allowing the cats time to get used to each other.

Dumbass roommate, despite already having cats she could barely look after properly, decided to get a kitten, and forbade Faggot from going near it, because she was certain Faggot would kill it. Joke was on her, because I let the new kitten into my room to play with Faggot, who in fact did not even ever hurt him, and she actually enjoyed playing with him.

In December of 2006, I had my own apartment where Faggot was free to move about as she wished. Later, I invited my first post-highschool roommate to live with me again, and she brought Fumi (Nekki had been allowed to go outside and disappeared at some point). Faggot and Fumi never became friendly with each other, but they did learn to tolerate each other.

In September of 2008, I finally returned to the US, moving to Florida. Due to my digital camera becoming cranky about communicating with my computer, I took no photos of Faggot between July 2008 and March 2011, and until I got a nice phone in 2016, cat photos were scarce.

In June of 2010, Chaosie rescued a tiny kitten from a CVS parking lot and brought him home. We named him Thor, but like with Faggot, the official name never stuck, and his name became Kittentits. Faggot adapted well to Kittentits, and while they never became close like some cats do, eventually she started grooming him every so often, and they  would play-chase each other back and forth down the hall.

It’s November of 2017 when she started having trouble eating. She lost 4lbs in a month, from 15lbs down to 11. A visit to the vet early December revealed that she had a cracked molar and an ear infection. The tooth was extracted, and a topical gel was applied inside her ear. As soon as the anesthesia wore off, she went right back to eating canned food but still wasn’t interested in kibbles.

A fall off the cat tree a week later caused her to have a sudden difficulty breathing and loss of interest in food all weekend, so back to the vet we went again. Xrays showed that her lungs had filled up with fluid, and the vet said that she probably wouldn’t last a week. He gave her a shot of a diuretic in the hopes that it would help. Surprisingly, it did. By next morning, her breathing was back to normal and she was eating again.

Only a week later, we took her back to the vet because she was scratching at her ear again, and had the ear drops reapplied. But perhaps the ear drops made her nauseous, because she stopped eating again. I did my best to get food into her, but it was a losing battle. On January 17, I noticed that she had trouble walking, and by that evening, she couldn’t even go to the litterbox without falling over. I spent the night holding her. The next morning, we made an appointment with the vet to euthanize her at 4pm. She died an hour before the appointment, in my arms.

I will miss you, my beautiful tortie.

Other Places I Reside